During the eighteen years that I have been studying...

During the eighteen years that I have been studying Christian Science our family has been helped both physically and financially. I experienced an almost complete stoppage of the action of the bowels for three weeks, but through Christian Science the action became normal, and has remained so during the sixteen years since then. We have experienced the supplying of financial needs in both small and large amounts, showing that "Soul has infinite resources with which to bless mankind," as Mrs. Eddy tells us on page 60 of "Science and Health with Key to the Scriptures."

A more recent healing seemed marvelous to me. For years I had been troubled with carbuncles. I usually did my own mental work and overcame the discomfort, but the carbuncles would continue, leaving a scar. In the spring of 1927 one began to manifest itself with the usual symptoms. I was very busy, and the thought occurred to me that I had better have help; so I wrote to a practitioner. From the time of the first treatment the swelling stopped; and as treatment was continued, instead of growing bigger, the carbuncle grew smaller and smaller until there was no evidence of it left. This, to me, was a splendid example of error being reduced to nothingness.

Send a comment to the editors
NEXT IN THIS ISSUE
Testimony of Healing
About three years ago Christian Science came to me... 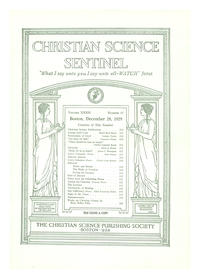