Your recent issues contain a report of two addresses given...

Your recent issues contain a report of two addresses given at Sutton Coldfield on the subject of Christian Science. Not only were these addresses given from an erroneous standpoint, but the introductory remarks of the chairman showed how little he also understood the subject. Christian Science is Christian because it is based on the teachings of Christ Jesus; and instead of being in opposition to those teachings it is in exact conformity with them. Christian Science is Science because it is the demonstrable knowledge of the law of God, the law which underlay the works of the prophets, Christ Jesus, his disciples, and the early Christians. In opening his address, the lecturer made an erroneous statement as to the basis of Christian Science, which I should like to correct. Its basis is that "all is infinite Mind and its infinite manifestation, for God is All-in-all" (Science and Health with Key to the Scriptures, by Mary Baker Eddy, p. 468). To understand the Christian Science textbook it is necessary to learn to distinguish between the references and statements as to man made in the image and likeness of God, and mortal man, or Adam. It is also necessary to understand that the real in Christian Science is that which is immutable, immortal, spiritual, harmonious, and eternal.

To tell a man who had met with an accident that he would get better "if he merely told himself to get better," as our critic avers, is not in accordance with the teachings of Christian Science. The members of the early Christian church for about three centuries after our Master's ascension healed the sick and even, it is recorded, raised the dead. This ability was lost through the gradual growth of materialism, which beclouded the knowledge of God; but this knowledge is now being regained through the teachings of Christian Science.

Send a comment to the editors
NEXT IN THIS ISSUE
Poem
Couldest Thou Not Watch? 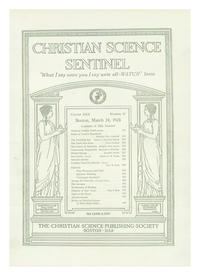