I should like to express my gratitude to God for Christian Science...

I should like to express my gratitude to God for Christian Science and for what it has done and is doing for me every day. I had been acquainted with it only a short time when, several years ago, I experienced a wonderful healing. I had a bad throat and was sent away to the hospital with diphtheria. I will not relate the details. I was there for three months, and on the danger list the whole time. As I did not make any progress and was unable to keep any food or liquid down, the doctor asked me if I would consent to be examined, saying there was something wrong internally.

The result was that I was sent home; they could not do anything else for me there, but had decided I should go to another hospital to be operated on. When I arrived home the doctor who attended me said that I had a tumor, and if I did not have an operation it would kill me. I told him God was going to heal me through Christian Science; and He did. I sent for a practitioner, and with her loving and patient work the tumor disappeared. I had been examined by three doctors of another hospital (which made six doctors in all), and they too said I ought to be operated on; but thanks be to God for the loving help of the practitioner, I began to get better very quickly, was able to eat a little every few hours, and within three weeks was up and dressed. I seemed to receive a double portion of God's goodness in a spiritual uplift; and I can best show my gratitude by living the life of a Christian Scientist in thought and in deed. I am indeed grateful to God for all the blessings I have received through Christian Science; to Christ Jesus, the Way-shower; and to our Leader, Mary Baker Eddy.—(Mrs.) JANET KEMP, London, England.

Send a comment to the editors
NEXT IN THIS ISSUE
Testimony of Healing
Christian Science came into my life after all material... 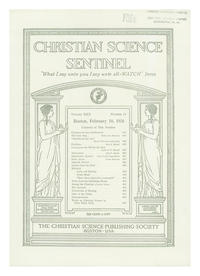