The Right Rule of Separation

Jesus said to the man sick of the palsy, "Thy sins be forgiven thee." The third tenet of The Mother Church, The First Church of Christ, Scientist, in Boston, Massachusetts, as given by Mrs. Eddy (Science and Health with Key to the Scriptures, p. 497, and Manual, p. 15), reads in part, "We acknowledge God's forgiveness of sin in the destruction of sin and the spiritual understanding that casts out evil as unreal." God, then, forgives sin by destroying the belief in sin. How does He destroy this belief? By causing it to be seen as apart or separate from Himself and His creation, and consequently as nonexistent.

Evil comes into seeming existence in human consciousness through the belief that God made evil. It is generally acknowledged that there is a "Great First Cause" or creator. The Bible tells us that "all things were made by him; and without him was not any thing made that was made;" and the general belief has been that both evil and good are real. Consequently, the conclusion has followed that God must have made both good and evil. 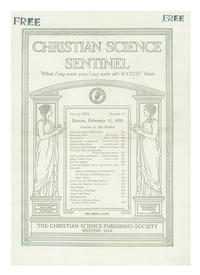