Filled with gratitude to God for all the help I have experienced...

Filled with gratitude to God for all the help I have experienced in Christian Science, and hoping that I may help on his way someone who is still suffering, I should like to tell of my healing of so-called incurable tuberculosis of the lungs.

In the spring of 1923, after I had been feeling run down and weak for a long time, I was suddenly taken very ill. Thanks to Christian Science treatment, which I had asked for, I recovered, and in the summer thought I was well again. And I might have been, but I allowed error, in the form of grief and worry, to occupy too much of my thought. The result was that the following winter I was taken seriously ill and was confined to my bed for nearly four months.

Send a comment to the editors
NEXT IN THIS ISSUE
Testimony of Healing
I wish to express my deep gratitude to our revered... 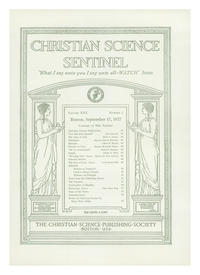