Escalon, California A correction was made in the September 17, 1927 Sentinel: On page 952 of Sentinel No. 48, the heading "Modesto,California (First Church)," should read "Escalon, California (Society)." (Society).—Dedication exercises have now been held at the Christian Science church, which is located at the corner of French Camp Road and Jones Park Boulevard. In the spring of 1922 the colonial type bungalow was erected on a lot which was a gift to the society. The auditorium has a seating capacity of sixty persons. The Reading Room has a pergola with French doors opening into the auditorium.—Modesto News-Herald.

Bay City, Michigan (First Church).—Dedication services have now been held for First Church of Christ, Scientist, of Bay City, the debt on the beautiful edifice having been completely paid. The church, of fireproof construction, seats about three hundred in the main auditorium, which is reached through a spacious foyer. Just after the church was opened, the following article appeared in the Bay City Times, which explains in some measure how the church was built and paid for: "A church built without the giving of a single entertainment or bazaar to raise money—built entirely from the freewill offerings of its members and its congregation—a church opened for its first service without any special ceremonies and without the presence of some speaker noted for his ability to arouse enthusiasm—such is the Christian Science church in which services were held for the first time on the closing Sunday of 1912."—Bay City Times. 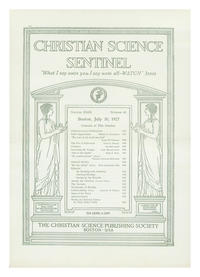