I became interested in Christian Science at a time when...

I became interested in Christian Science at a time when I was making arrangements to undergo an operation for hemorrhoids. The friend who called my attention to it had been healed through Christian Science of the same trouble. The healing of this difficulty was slow. In a short time, however, I was healed of stomach trouble, headaches, constipation, and eczema. One healing I experienced through Christian Science, for which I am particularly grateful, was the overcoming of a sense of weariness that seemed to be with me constantly. Even when I awoke in the morning I was not rested. Now I am seldom tired. It has been a great relief to be free from this feeling.

I had worn glasses for about fifteen years. When I was first fitted with glasses the oculist told me I should have to wear them for only a short time; but, instead, I had to get stronger lenses every few years. A few months after I became interested in Christian Science the glasses were broken. It was several days before I could obtain new ones; and when I did, I found that my eyes were healed and I had no further use for the glasses.

Send a comment to the editors
NEXT IN THIS ISSUE
Testimony of Healing
I came into Christian Science after all medical help had... 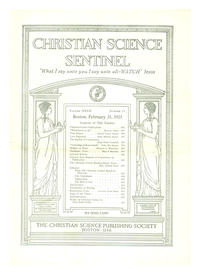