Perhaps there is no more beautiful picture of a group of earnest-hearted students than the one described in the Bible in the second chapter of the book of Acts. Obediently, "with one accord in one place," were these faithful students found watching for the promised visitation of the Holy Ghost. And lo! when it came, as "a sound from heaven," with all its healing power and comfort, they spake "as the Spirit gave them utterance;" and all men marveled at the signs and wonders which resulted. The spirit was, indeed, poured out upon these awakened students; and we are told that they did break their bread (truth) and eat their meat "with gladness and singleness of heart."

Again, eighteen centuries later, there were other groups of humble-hearted students gathered together, when the words of an inspired woman, Mary Baker Eddy, made their hearts burn within them, illumining their thought and opening it to an understanding of the Holy Ghost, or divine Science, until they, too, awakened to its healing power and presence. Then they, as did the earlier students, went forth into the world "with gladness and singleness of heart" to prove what they had been taught. In due season, to this same woman certain provisions were revealed, whereby all who are ready to become students of the Christ, Truth, may be banded together annually for the purpose of receiving more of the Pentecostal spirit of divine Science,—and we call these gatherings Christian Science Students' Associations. 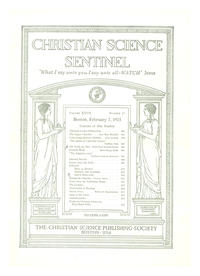