I became interested in Christian Science through the healing of my husband, after physicians had pronounced his case incurable. After his healing I went to a practitioner for help, as I was a nervous and physical wreck, and through his faithful work a spinal trouble was healed, my nerves became strong, and I gradually began to live a new life.

I found myself applying Christian Science to discordant conditions, both physical and mental, as I studied the Bible and Mrs. Eddy's writings. I had been an active member of a church for twenty-three years, with many longings during the latter part of those years for a clearer understanding of God; so it was with joy that I discerned Mrs. Eddy's revelation of God as divine Principle. It is over twelve years since I began the study of Christian Science, and during that time it has been the only physician in our home. My faith has been tested many times, but God has been my ever present help. I have proved for myself, in a degree, the meaning of these words by Mrs. Eddy in "Science and Health with Key to the Scriptures" (p. 569): "He that touches the hem of Christ's robe and masters his mortal beliefs, animality and hate, rejoices in the proof of healing,—in a sweet and certain sense that God is Love."

Send a comment to the editors
NEXT IN THIS ISSUE
Testimony of Healing
That the study of Christian Science has a healing and... 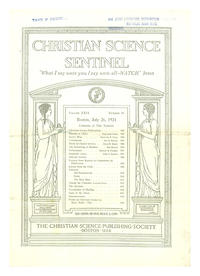