FROM out the pushing, jolting mass comes one who is weary and heavy in spirit. As he steps aside, he views the swaying multitude of men. These countless numbers are striving, the one against the other, for place and power, riches and honor. Is it possible that he has been and still is a part of that maelstrom? Ah, yes! As he stands, he ponders on the mirth and the tears of it all, the praise and the blame, the triumph and the defeat, the rise and the fall. But he is now able in some degree to say, "Much ado about nothing." Then the questions may come; What is, then, worth while? What aim can assure one of a recompense that will bring satisfaction? Is there an ideal, in the attainment of which he will find harmony and peace and joy?

This observer is approaching humility. He is beginning to detect the vain boastings of self-will, which are of the essence of pride. This must have been the mental attitude of the prodigal son when he said, "I will arise and go to my father." He had accepted a false sense of existence, and wandered into the mazes of material thinking,—into a "far country,"—where, as Mrs. Eddy says in "Science and Health with Key to the Scriptures" (p. 148), "Physiology exalts matter, dethrones Mind, and claims to rule man by material law, instead of spiritual." In so doing, he "wasted his substance with riotous living" and "began to be in want." The bubble of sensuous pleasure had burst. Thus was the prodigal son brought low by the "famine in that land;" and in his extremity there was wrought a complete reversal in his mental processes. His whole experience may be summed up in the Master's words, "Whosoever shall exalt himself shall be abased; and he that shall humble himself shall be exalted." 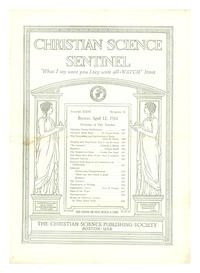