Christian Science denies the reality of sin and disease...

Christian Science denies the reality of sin and disease because God never created these conditions, and He is the only creator. When Jesus was called to the bed of Jairus' daughter, he said, "The maid is not dead, but sleepeth;" and we are told, "They laughed him to scorn." Would our critic say that no good had been done by Jesus in shutting his eyes to what our critic terms "the truths which were part of the people's ordinary life," that is, the manifestation of death? He raised the damsel from the dead. Again, when Lazarus was dead, Jesus first said he slept; but when he saw that those around him did not understand what he meant by that, he said, "Lazarus is dead." Yet he raised him from the tomb. Our Master was constantly acting in direct contradiction to physical sense testimony, showing that the testimony of the physical senses is false, and can be changed by the consciousness of eternal reality. Christian Science has been teaching for over fifty years that God is not the author of sin, disease, and death; and this teaching has been so remarkable in its results that other Christian denominations are now beginning to advocate it.

Send a comment to the editors
NEXT IN THIS ISSUE
Article
As an international daily newspaper The Christian Science Monitor... 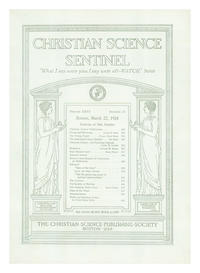