Our beloved Leader, Mary Baker Eddy, in "The First Church of Christ, Scientist, and Miscellany" (p. 189), says, "The government of divine Love derives its omnipotence from the love it creates in the heart of man; for love is allegiant, and there is no loyalty apart from love." The character of Ruth, as portrayed in the Bible, affords a beautiful illustration of true loyalty. Ruth is named as an ancestor of Jesus: she is one of the women mentioned by Matthew in the genealogy of Christ Jesus. After the loss of her two sons, Naomi, the mother-in-law of Ruth, having nothing materially to offer her daughters-in-law, advised the return of both to their own people. This accomplished, in her new surroundings Ruth's thought rose above the tribal god of her fathers; and having learned to worship the true God, she refused to return to her own people and to the Moabitish god Chemosh, saying to Naomi: "Intreat me not to leave thee, or to return from following after thee: for whither thou goest, I will go; and where thou lodgest, I will lodge: thy people shall be my people, and thy God my God." Ruth's loyalty to God was the result of her spiritual understanding. Her experiences had helped her to know the true God, and her faith in Him enabled her to turn somewhat from the false sense of life and human relationship to realize man's true relationship to God. This healed her of the sense of loss and separation.

When one understands his relationship to God, divine Principle, he begins to entertain the true sense of loyalty. But he will need to examine his thought, prayerfully and persistently, if he would shut out the criticism, the condemnation, the unrest, and the dissatisfaction which error is continually endeavoring to present through misunderstanding and misrepresentation. Honesty and loyalty go hand in hand. Both are qualities of the divine Mind, and are gained through the understanding of spiritual Love. 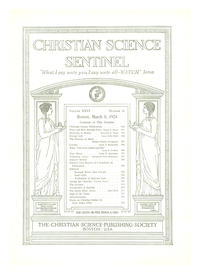