When Jesus uttered those wonderful words, "I am the bread of life: he that cometh to me shall never hunger; and he that believeth on me shall never thirst," he well understood the deep, unsatisfied yearning of the human mind for a strength and power outside of itself upon which to lean in the hour of need and distress. To-day Christian Science is repeating the loving invitation to sick and suffering humanity to find in this blessed truth solace for every sorrow, healing for every disease, and balm for every woe. Religion, philosophy, dogma, and creed have all been tried and found wanting in the endeavor to lift humanity above its fears and woes; but this new understanding of God, not as a distant Deity to be feared and dreaded, but as ever present Love, the all-infolding Father-Mother God, to be known, understood, and demonstrated, is transforming the lives of thousands all the world over. 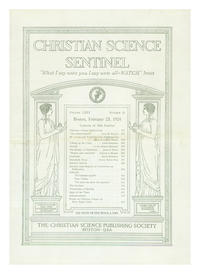