In an article on "Judaism and Communism" a professor...

In an article on "Judaism and Communism" a professor indicates that Christian Science has a psychological foundation. Please permit me to refer to Webster's International Dictionary, in which psychology is defined as "the science of mind; systematic knowledge and investigation of the genesis, powers, and functions of mind." The professor has not noticed that Christian Science bases its teaching on the Bible, not on the knowledge of the so-called human mind as Christian Science asserts that God is the only Mind, and that the real spiritual man is God's image and likeness. Mary Baker Eddy, the Discoverer and Founder of Christian Science, writes in the textbook, "Science and Health with Key to the Scriptures" (p. 99): "Christian Science teaches only that which is spiritual and divine, and not human;" and all who will take up the study of the life and works of Christ Jesus, together with the explanations given by Christian Science, will be able by "signs following" to prove that the teaching is the same now as then just as God is the same ever persent Love.

When the professor talks about "oddness and aberrations from sound sense" in connection with Christian Science, he also shows a lack of knowledge of the teaching and practice of Christian Science, which is now known by thousands of happy people, who, through it as a religion, have found a remedy by which to be saved from both sin and disease. Christ Jesus said, "Wherefore by their fruits ye shall know them."

Send a comment to the editors
NEXT IN THIS ISSUE
Article
In a recent communication on "The Power of Suggestion"... 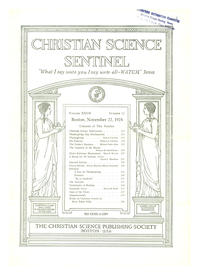