Many years ago, a business woman was accustomed each day to cross a large city by way of the long main street. One day, while looking from her office window at the top of a tall building, she discovered that she could distinguish the hotel where she lived; and the thought came to her, "Why need I go all the way through the city when there is my hotel, apparently only a few blocks away if I go straight across?" Accordingly, that evening she descended to the street and took a new way in the direction in which she had seen her hotel. The way was persisted in for some time, until it was perceived that she had reached a portion of the city which was strange and inhabited by foreigners, and that even the children in the street were speaking a strange language, and they was no one who understood her, or could direct her. Bewildered and confused she turned back, but in the growing dusk was unable to find her way either to the place from which she started or to her own hotel. After a long time she came upon one of her own countrymen who directed her to the main street; and thereafter she hastened home by the usual route, to attempt no more such excursions into unknown parts.

The destination which we all hope to reach in Christian Science is that perfect understanding of God and man which will enable us effectively to assert dominion over every evil belief, and secure to us the power to heal ourselves and those who come to us for help. Sometimes we see from our mental windows new and apparently more direct streets to our destinations. These streets appear, not only to beginners in the study of Christian Science, but sometimes also to those who have worked longer,—who have toiled all night and yet feel that they have but an empty or half-filled net. The Bible is replete with accounts of honest, conscientious men who were sometimes tempted to turn aside. But when Saul of Tarsus was ready to receive the heavenly vision, in other words, when he was ready to acknowledge the Christ, he was found in the "street ... called Straight;" and that is where we shall be found, when we are ready to acknowledge the Christ and receive complete healing. To seek it in any by-street, or in what claims to be a more direct avenue, is waste of time and but adds trouble. 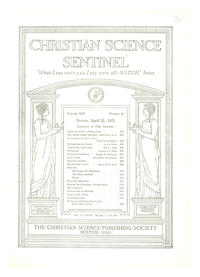