A woman had come to my home, not long before, selling religious literature. I had told her I was not interested, but she was very insistent, finally asking my reason for refusing to buy. I replied that I was a student of Christian Science and was entirely satisfied with its true and beautiful teaching. She stated emphatically that she could never believe in Christian Science, her reason being that she believed Christian Scientists were worldly. She then asked me if I had left all for Christ. I answered that I knew I had not but that I was earnestly striving daily to be better in every way. She said she had already left all for Christ; and to her that decided the point that Christian Science was inferior as a religion. 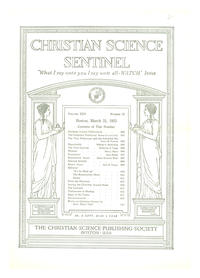