There are times of the year when, on account of the unusual amount of rejoicing going on all around us, it is an excellent thing to remember the reasons for our so great a state of happiness. So it is, particularly, with the commemoration of the birth of Jesus. It is not, as some seem to think, merely the birth of Jesus that in itself is the cause of so much rejoicing, even though this birth of itself was a marvelous thing. It is, rather, that the birth of the great Nazarene was the beginning of a new era in the world,—the beginning of the greatest era of the fulfillment of prophecy that could ever come to earth.

From earliest times in Biblical history we have the oftrepeated prophecy that a time would come when there would be given to humanity such a revelation of Truth, through one who was divinely inspired, that sin and disease and even death would lose their false dominion over mankind. Up to the time of Jesus' birth, therefore, we have what may well be termed the era of prophecy, a period of human religious history in which prophecy reigned, not only among the Hebrew people, but also to some extent among other nations of the earth. The whole then known world was, as it were, in a state of great expectancy, an expectancy which prophecy itself was fostering by continually inspiring those who believed in God to greater and still greater efforts to understand Him, and to look for the coming of him who, while having the spirit without measure, was to take upon himself the form of the flesh, in order to teach humanity the way out of the wilderness of mortal error or unrighteousness into the understanding and demonstration of the kingdom of heaven, God's reign of righteousness. Jesus himself clearly described this period of expectancy in the world's history when he said to his disciples, "Blessed are the eyes which see the things that ye see: for I tell you, that many prophets and kings have desired to see those things which ye see, and have not seen them; and to hear those things which ye hear, and have not heard them." 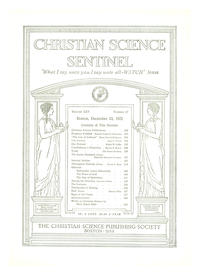