I am happy to express my deepest thankfulness to God...

I am happy to express my deepest thankfulness to God for the teachings of Christian Science as given us by our revered Leader, Mrs. Eddy; for since I turned to this Science my life has been transformed. Formerly unhappy and tormented, now I am peaceful and happy in the assurance that God is Love and that Love is the great conqueror. Mine was a moral and mental healing. From childhood I had been selfish, passionate, jealous, looking first of all for my own satisfaction, and finding it not; for I had also need of a better ideal. When I was twenty-five years old, I was a prey to what is known as acute neurasthenia, aggravated with frequent periods of hysteria, during which all moral sense, all self-discipline, entirely left me. I was altogether in a very bad condition both physically and mentally. Many doctors did their best for me, and I was taken care of by a friend who, through her noble example and indefatigable endeavors, had after many long years brought me back to an exterior dignity of life; but the basis of that life was not changed, and there were still in me these black depths, which often rebelled and made me the slave of my worst instincts.

At that time a friend spoke to me about Christian Science. I was much interested and bought a copy of Science and Health, which I read again and again, striving to follow its teachings, often amidst what seemed dense material clouds. My healing was slow, but the light was always there and led me through the dark places. I had been brought up religiously, but had left my church when twenty-two years of age, and when I wanted to unite again with a church, I did not know where to find the one I needed. After attending a Christian Science service, I knew that I had found the church I had really been seeking all along.

Send a comment to the editors
NEXT IN THIS ISSUE
Testimony of Healing
Nearly two years ago I started to investigate the teachings... 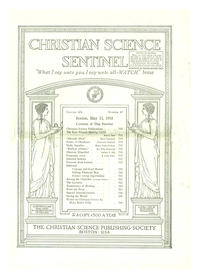