No subject is of greater moment to humanity than that of mind. What makes up the warp and woof of one's mental life? What stands sponsor for a man's opinions, inclinations, or acts? What is the deciding factor in our thinking, or whence do our thoughts come? Is God acknowledged as the supreme and only Mind, and therefore as the only source of right thought, or does that which is not good occupy the throne of intelligence for us and hold us captive to unworthy thoughts?

The apostle Paul differentiates between mental states by dividing them into two classes, namely, carnal-mindedness and spiritual-mindedness, the former including all evil and its effects, and the latter embracing all right consciousness and activity. In Christian Science these contrasting terms stand for mortal mind and divine Mind; and they represent the difference between error and Truth, between what is unreal in human existence and what is real. Each human being is directly involved in making a distinction in these terms, from the fact that knowingly or unknowingly he is accepting one or the other as his mind or consciousness. And what can possibly concern a man more intimately than his choice of a mental abode? 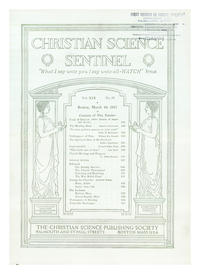