In a recent issue of the Unit is published an article from...

In a recent issue of the Unit is published an article from a medical journal which may create the impression that Christian Scientists are unfriendly to the medical profession. This misconception, if it exists, may have arisen from the fact that physicians and Christian Scientists entertain widely differing opinions as to the nature of disease and the proper methods to be employed in preventing and curing it. But this variance should not, and it is believed does not, unless in rare individual cases, lead to anything in the nature of unfriendliness, or induce either profession to discredit the practice of the other.

Mrs. Eddy has said, writing on page 151 of Science and Health: "Great respect is due the motives and philanthropy of the higher class of physicians. We know that if they understood the Science of Mind-healing, and were in possession of the enlarged power it confers to benefit the race physically and spiritually, they would rejoice with us. Even this one reform in medicine would ultimately deliver mankind from the awful and oppressive bondage now enforced by false theories, from which multitudes would gladly escape." 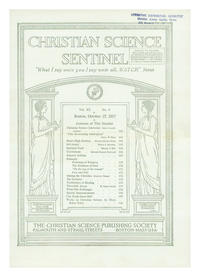