There were those in the not very distant past, when the interest in what became known as the higher criticism was developing, who thought that religion was about to be destroyed, but it was not. Instead, great men, such as Dr. Washington Gladden, began to assemble what was left, and behold, there was more religion and better religion. There has been no age when this same fear has not taken possession of some in the face of something they did not understand or that was different. Recently there have been many who have seen in the world war which just now afflicts the earth, the elimination of the church and religion. At first it seemed that it was true that "Christianity had failed," and that the gospel of force was to take the place of the gospel of peace. Time passes on and religion endures, horrible catastrophes follow in quick succession, but religion endures; and it is reported on the authority of able men that more and more are the people of Europe turning to religion as they sense the incompetence of anything else to meet actual conditions. Do not worry about religion coming to an end, but take what you have, be it much or little, and set it at work. There is no solution of world problems, no settlement of world difficulties, save the universal brotherhood of man put into operation, and that is religion, the religion which can never be destroyed. 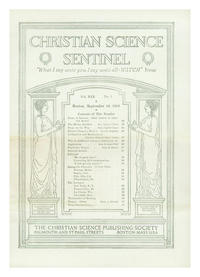