I wish to express thanks for the proofs of God's goodness...

I wish to express thanks for the proofs of God's goodness that I have received through Christian Science. This last winter my face, ears, and hands became badly frost-bitten, and this caused me to worry greatly. My face was very red and swollen, and there was a discharge. I was afraid to go on the street, as people would look at me with a frightened expression. The physician whom I consulted being unable to relieve me, I applied to a Christian Science practitioner for treatment, with the expectation of being helped, and it took but a few days for a cure to be effected. There was a marked improvement on the second day, when the swelling went down and the pain ceased. I would also mention a fine instance of healing when on one occasion I badly bruised a finger. I can but say that the thanks which I am expressing herewith are given in a spirit of great joy and deep sincerity.

Send a comment to the editors
NEXT IN THIS ISSUE
Testimony of Healing
It has been about twenty years since Christian Science... 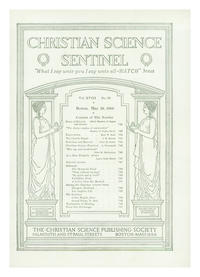