In his address on "Mental State Affects Health" the...

In his address on "Mental State Affects Health" the Rev. Mr.—shows the evil effects of fear, anger, and worry on the human mind and body, and the good effects produced by the Christian graces of "faith, love, and gladness," of which he says that "faith is the mightiest and divinest of all." But this writer errs in enumerating Christian Science among the faith-cures of today, and when he states that "Christian Science and the efficacy of hypnotism are all simply different illustrations of the basic principles of the healing power of suggestion," he makes a serious mistake. Christian Science is not "faith-cure" in the ordinary acceptation of the word, for Christian Science healing requires more than faith, namely spiritual understanding.

As Mrs. Eddy says on the first page of "Science and Health with Key to the Scriptures," "The prayer that reforms the sinner and heals the sick is an absolute faith that all things are possible to God,—a spiritual understanding of Him, an unselfed love." Therefore nothing could be farther from the practice of Christian Science than hypnotism and mesmerism. The hypnotist or mesmerist seeks to control the patient's thought and to make him think he is not sick, though in fact he believes him to be so, thereby working on a dishonest basis. Even though he should apparently succeed for a time, he is robbing the patient of his individual power of thought, from which a relapse would bring confusion and prove the last state of that man to be "worse than the first."

Send a comment to the editors
NEXT IN THIS ISSUE
Article
I believe that it is the rule rather than the exception for... 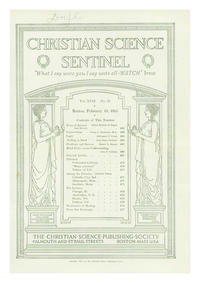