"Ye must be born again"

Christian people are familiar with the story of Saul of Tarsus, and how by a sudden illumination he was converted to a follower of the once despised Nazarene. In a few days, according to the story told in the New Testment, this Roman citizen had been transformed from a persecutor of Christians to an active worker in the cause of Truth. Today the miracle is being repeated by many people who turn to Christian Science in some hour of need, or perhaps in a moment of investigation. With minds indifferent, where they are not actually prejudiced by current misinterpretations, they have taken up some of the literature of this faith to read, or perhaps have attended for the first time a service in some Christian Science church.

It may be the very first chapter in Science and Health, that beautiful one on Prayer, which suddenly illumines the thought of the inquirer; or perhaps it is one of Mrs. Eddy's hymns sung with spiritual uplift during the Sunday morning service; or again it may be the simple, straightforward, earnest testimony of those present at the Wednesday evening testimony meeting which points the truth of the practical character of this gospel and starts that transformation of thought which sooner or later will change one's outlook on life as completely as Saul's was changed. 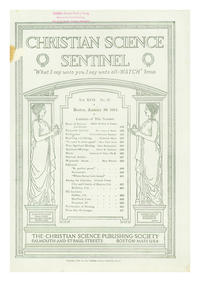