The dictionary describes courage as "the quality that enables men to meet dangers without fear." But such an explanation is ambiguous, and may even be misleading to the seeker after Truth; for unless courage is the outcome of spiritual strength and not merely a human quality, it tends to engender an arrogant, headstrong, unlovely character, besides being liable to fail at any point for lack of divine authority. Indeed, a material sense of courage may easily become a veritable snare to tempt men to break the first commandment, "Thou shalt have no other gods before me," and as such it is a danger to one's "mind, body, or estate." If a man believes that because of any personal intelligence, will, position, or power he is fitted to face the dangers and difficulties of human experience, he is gravely mistaken, and will find it out sooner or later, probably at the price of some bitter experience. Fortunately, such experience is not necessarily the lot of any one of us, for man, made in the image of God, is endowed by Him with the inalienable right of "dominion." It is through this God-given right to govern and control all the conditions of our own life, as revealed and demonstrated in Christian Science, that each of us can lay claim to courage. Courage, then, to be legitimate and reliable, must be born of faith in God, faith that He can and will maintain His own law in and through man. In Science and Health (p. 423) we are told that when one relies upon divine Mind, he works "with the stimulus of courage and conscious power."

Now, if any one doubts the effect of spiritual courage as a help to solve his difficulties, of whatever nature they may be, he has only to refer to the Bible to find almost endless proofs of what it has already achieved for mankind. Let us review three notable instances. First, we may recall how Shadrach, Meshach, and Abednego, though seemingly helpless and at the mercy of a ruthless tyrant, yet had the courage, when threatened with death by fire, to declare, "Our God whom we serve is able to deliver us from the burning fiery furnace, and he will deliver us out of thine hand, O king." In undeniable proof that their courage was justified and in direct accordance with the will of the Almighty, we further read: "And the princes, governors, and captains, and the king's counselors, being gathered together, saw these men, upon whose bodies the fire had no power, nor was a hair of their head singed, neither were their coats changed, nor the smell of fire had passed on them." 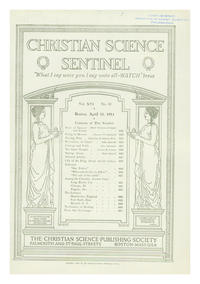