In the "Manual of The Mother Church" we read: "Testimony in regard to the healing of the sick is highly important. More than a mere rehearsal of blessings, it scales the pinnacle of praise and illustrates the demonstration of Christ, 'who healeth all thy diseases'" (p. 47). This statement has appealed to the writer with much force of late, for it was through testimony of healing in Christian Science that he first heard of this teaching.

I had spent three months in the United States and Canada, touring in search of health, and had returned to England no better, but rather worse, in consequence of having pinned my faith to a medical specific which I found there. Strange to say, I never heard of Christian Science healing during that visit to America in the fall of 1901, but on coming home it was the first thing which claimed my attention. A member of my church came to tell me of her own healing, and what appeared to be the still more wonderful proofs of healing in her sister's family. Through this, the first Christian Science testimony I ever heard, I was led to make personal investigation of the truth of these statements, and afterward took up the study of the text-book of Christian Science, "Science and Health with Key to the Scriptures" by Mrs. Eddy, which ultimately brought me entire freedom from the trammels of scholastic theology. Through it I was also delivered from what had become to me the irksome yoke of a ministry which had proved to be in my case at least a mere professional following of Christ, and not the divinely appointed way which calls for the healing of the sick. Three years ago I was provided with an opportunity of proving the truth of Christian Science healing over the claims of physical sense, and the outcome made me still more grateful. 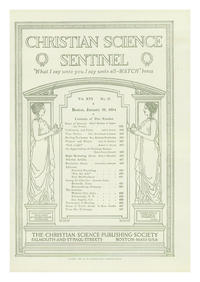