The advent of Christian Science marks a new era in the field of therapeutics. In this realm much stress has been and is yet laid upon the efficacy of various remedial agents, while the value of preventive measures has not until recently been seriously considered. As human thought advances out of matter into Mind, however, the value of prevention becomes more and more apparent. Men are fast awakening to the fact that so-called curative methods which deal wholly with effects, fail to get at the root of the trouble. Too long they have suffered from the belief that the effects of sin can be cured by treating the body without reckoning with the mind or mentality of the patient.

Dealing primarily with causation, Christian Science naturally lays more stress upon prevention than upon cure. It by no means ignores the importance of curative agents, but emphasizes the fact that the one universal remedy, divine Mind, is both preventive and curative. In the logic of Science it therefore follows that a certain amount of righteous mental activity can prevent as readily as it can cure disease. The student of Christian Science soon grasps the thought that the only cure for physical ills is the one which will correct and prevent the wrong mental condition which is directly responsible for their appearance. The surgeon's knife has never yet corrected character, or severed the connection between sinful thought and bodily ills. It requires mental surgery to remove the cause of sickness, and mankind are fast finding this out and striving as never before to deal, not with the body, but with the thought which is controlling it. When this is scientifically effected there is nothing in evidence for material surgery to do. The discovery of this great fact sounds the key-note of individual liberty, for it is the only solution of the problem of preventing and curing disease. It is transformation by the renewing of the mind, and not corporeal treatment, which most concerns sick humanity. Attempted bodily adjustments are feeble efforts to remove a shadow without disturbing that which casts it. 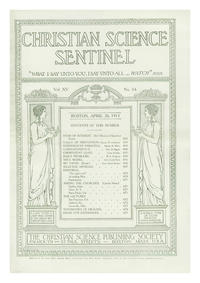