The significance of victory in the light of Christian Science is diametrically opposed to the general acceptance of the term. The carnal mind with its self-will and mad ambition can never achieve true victory, but must needs give place to the meekness and might taught and demonstrated by Christ Jesus. In Paul's letter to the Corinthians we read, "Thanks be to God, which giveth us the victory through our Lord Jesus Christ;" and on page 571 of the Christian Science text-book, "Science and Health with Key to the Scriptures" by Mrs. Eddy, are these words: "At all times and under all circumstances, overcome evil with good. Know thyself, and God will supply the wisdom and the occasion for a victory overevil." "The weapons of our warfare" are indeed not carnal, but are, as the apostle says, "mighty through God to the pulling down of strong holds." Every illusion of this so-called carnal or mortal mind must be brought low, that human thought may come into subjection to Truth and Love.

Christian Science, the word of God, is engaged in extirpating from human consciousness all wrong thoughts, malice, lust, hate, anger, indifference, fear, etc. Thus the entire human consciousness is reached, and the beneficent effect of the truth is universally felt in all the affairs of life. The glorious work which Christian Science is accomplishing has been promised since the beginning, as when the prophet wrote, "And the Lord alone shall be exalted in that day." This is the day of salvation, the time when the light of ever-present Love is outshining the darkness of ignorance, superstition, and persecution. The law of God is casting down the imaginations of materia medica, its laws of disease and hygiene, and "bringing into captivity every thought to the obedience of Christ." That belief of the carnal mind which Paul says is "enmity against God;" that belief of mind in matter, like the stone which was rolled away from the sepulcher of Jesus by the power of infinite Love, is overcome today in Christian Science. Truth brought Daniel safely out of the den of lions, and is always the victor, never the vanquished. 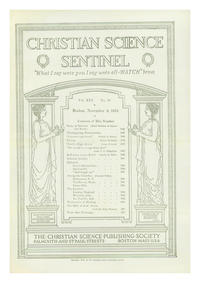