The unceasing freshness of Christian Science for the student often lies in the ever-extending application of some of the simple truths of the Bible which are made clear for the first time through the study of the text-book, "Science and Health with Key to the Scriptures" by Mrs. Eddy. An instance of this kind is the teaching, in the second chapter of Science and Health, that the essential element of the doctrine of atonement is contained in the simple, obvious meaning of the three syllables of the word—at-one-ment. The first two syllables, "at-one," are simple English words, and their obvious meaning when used together is that of unity or oneness. The last syllable, "ment," is a common suffix denoting a condition or state of being; for instance, the word "contentment" means the condition of being contented. Thus analyzed, atonement means a condition of unity.

Recognized authorities in defining "atonement" usually give a general use of the word that differs somewhat from its common religious significance. In general use it is represented as having very much the same meaning as concord or agreement, while its religious significance is given as synonymous with expiation or reparation. These and other authorities show that most of the denominations of the Christian church today agree, at least to that extent, upon the meaning of atonement. While concord or agreement denotes a condition of unity or at-one-ment, reparation or expiation describes a means of changing from a condition of division or discord to a state of unity or concord. The distinction between the two uses of the word is vital, and is characteristic of the differences between scientific Christianity and what is generally termed orthodox Christianity. This Science teaches that of necessity the real or spiritual man is and always must be in harmony with God, infinite Mind, and there is neither occasion nor opportunity for the restoration of harmony. The teaching of most modern churches is that man is out of harmony with God now, and that he must resort to some means, described as atonement, in order to regain his proper state of accord with his Maker. 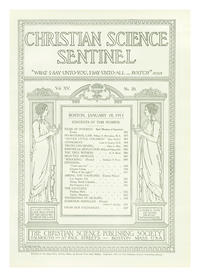