"THE CHURCH THAT IS IN THEIR HOUSE"

Before becoming a member of The Mother Church and of a Christian Science society, the writer used to be greatly puzzled by St. Paul's love, so often and so clearly expressed in his epistles, for the churches of Asia. How could he feel such an intimate and personal affection for corporate associations, the greater number of whose members, even in churches of his own planting, must have been individually unknown to him? This seems to have been the mental question. But it was quickly answered by observation and experience of the spirit of love and unity which normally pervades and animates the gatherings of those who meet in order to read or to listen to the Christian Science Bible Lessons. Is not apostolic history seen to be repeating itself when we consider the words of St. Paul in the last chapter of I Corinthians, "The churches of Asia salute you. Aquila and Priscilla salute you much in the Lord, with the church that is in their house"? Who that has attended one or more services of some branch church or society, services held perhaps in the earlier days by some members "in their house,"—a procedure calling often for no less courage and self-immolation than are called for in the formation of a "Church of Christ, Scientist," does not thereafter hold for the same a permanent fellow feeling and interest?

Under the title of "Recognition" there stands in the Church Manual (Art. XXIII, Sect. 12) a by-law which reads thus: "In order to be eligible to a card in The Christian Science Journal, churches and societies are required to acknowledge as such all other Christian Science churches and societies advertised in said Journal, and to maintain toward them an attitude of Christian fellowship." Section 1 of the same article contains the words, "Each Church of Christ, Scientist, shall have its own form of government." What scope for individuality and freedom of action, and withal what a bond of unity, is involved in these few lines! But we are led on to a consideration of Mrs. Eddy's scientific understanding and explanation of the word "church" (Science and Health, p. 583), and also to what she says in the chapter on Atonement and Eucharist, namely, "Our church is built on the divine Principle, Love. We can unite with this church only as we are new-born of Spirit, as we reach the Life which is Truth and the Truth which is Life by bringing forth the fruits of Love,—casting out error and healing the sick" (Science and Health, p. 35). With this church there is no membership that is permanent except the member continues to maintain a loyal attitude and to prove in some measure his fitness for the privilege that is his. 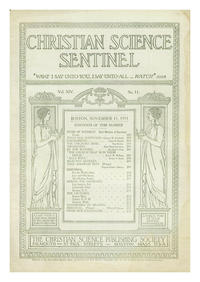