The complications are many which appear in the problems of mortal experience that daily present themselves for solution, and without clearly defined rules of action mental chaos may ensue. The account of evil's origin, as given in the second chapter of Genesis, describes such mystification. Evil's method remains the same, in presenting its claims to individual consciousness in the affairs of today, as in the original Scriptural account. Referring to the Old Testament narrative, Mrs. Eddy says: "It would almost seem, from the preponderance of unreality in the entire narrative, as if reality did not predominate over unreality, the light over the dark, the straight line of Spirit over the mortal deviations and inverted images of the creator and His creation" (Science and Health, p. 502). The same discrimination is needed in dealing with every-day conditions that is needed in the study of the Scriptures.

The refusal to accept as a law of being that which is a departure from law, calls for keen spiritual discernment on the part of the Christian Scientist. It enters alike his spiritual realization and study in the privacy of the closet, and his daily round of practical application of what is therein realized. The epistle to the Hebrews deals with the old and new covenants with clear and convincing conclusions as to the central point: "I will put my laws into their mind, and write them in their hearts: ... I will be merciful to their unrighteousness, and their sins and their iniquities will I remember no more." This is the better way, the divine way, and offers universal salvation. To follow the divine plan, namely, to have the divine law written upon the heart and mind, is the only way of release from the human belief in bondage to the retributive measures of the old covenant. 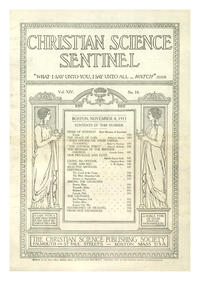