I feel so very thankful for what Christian Science has...

I feel so very thankful for what Christian Science has done for me and for our little boy, that it gives me great pleasure to send a testimony, and I sincerely hope that many mothers may be influenced to have their children relieved from bondage through Christian Science. Four and a half years ago our little boy suffered intense pain in his side from what proved to be a rupture. A truss was fitted to him, which the doctor thought would cure it in a year. We waited two and a half years, then consulted another physician, who said that if the rupture was not healed in another year he should advise an operation. When the year had passed the child seemed to be getting worse, and we tried another truss, which the physician said he must wear night and day.

I had read "Science and Health with Key to the Scriptures" by Mrs. Eddy, and known of many wonderful demonstrations, but felt that this case was so serious that an operation was the only sure cure. We had consulted one physician regarding the operation, but the nearer the time came, the more dreadful it seemed to think of that dear child, seven years old, having to go through such an ordeal. One morning I asked my mother if she would take the little boy down and find a good practitioner. They went, and the child had a treatment that day. After they returned home we found that the enlargement was below the truss, so I had to put him to bed. The next morning when he stepped out of bed it was down again. This seemed dreadful, but I kept the thought that as God's child all would be well. We took him to the practitioner for five treatments, and one morning he said he had dreamed that the bunch was gone. He begged to have the truss taken off, and from that minute I knew that he was healed and I told him he need not wear it any longer. From that time he has been like a different child, for he romps and plays like a boy, which he never did before, and is perfectly well. He has now been without the support for over a year, and we feel so happy to think of his freedom from suffering.

Send a comment to the editors
NEXT IN THIS ISSUE
Testimony of Healing
I have felt for some time that I, as one who had been... 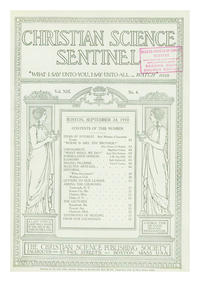