I wish to express my sincerest gratitude for the blessings...

I wish to express my sincerest gratitude for the blessings which have come to us through Christian Science. Last summer our daughter, eight years old, fell in the street as a result of sudden fright, and seriously injured the left thigh. I heard the child cry out, and when I reached her I at once declared the truth, with the result that the swelling went down immediately and the leg took its natural position. My husband carried the child home, and I sent word to a Christian Science practitioner, who came on the same day, although she lived at a distance from us. The pain soon stopped, and the child fell asleep. After some time, however, she awoke in pain, and as we did not seem to be able to get over our sense of fear, we called a physician, contrary to the child's wish, who kept saying: "God is right here; He will help us; we need no doctor." The physician came the same evening, and was surprised to find no inflammation, as several hours had elapsed since the so-called accident. He said that he would call the next day to set the bone; that in the mean time we should use cold applications so as to prevent inflammation; but we did not use them, neither was there any inflammation.

On the following day the physician stretched the leg (this causing very little pain) and dressed the extended limb. He recommended the greatest care and told us that possibly the leg would become shorter than the other. He said that after four weeks' complete rest he would apply a light bandage, with which she would have to lie still for another week or two, and that she could then try to step on the leg while wearing a brace. This time, however, we were not afraid, for we knew the child to be safe in God's care. She suffered no pain, and when, two weeks later, the physician examined the leg and pressed the flesh around the bone, she laughed, much to his astonishment, as he had told us previous to the examination that it would be very painful, this being a case of splinter-fracture. He never had seen such a case before, but having engaged the physician's services, we thought it best to follow his further advice.

Send a comment to the editors
NEXT IN THIS ISSUE
Testimony of Healing
Christian Science has done so much for us that I do not... 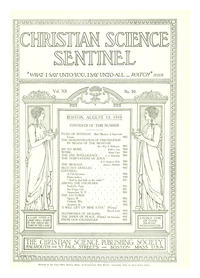