The problem of supply is one which has to be met by each of us in some of its various forms and phases, and its correct solution proves the possibility of solving all other problems. If scientifically demonstrated, it proves that God is the only creator, the only Mind, the only real source of good. It therefore follows that want, sickness, and sin, which are not good, are no part of God's creation, and should not be so considered or recognized.

On page 8 of "Unity of Good" Mrs. Eddy says: "Everything is as real as you make it, and no more so. What you see, hear, feel, is a mode of consciousness, and can have no other reality than the sense you entertain of it." A friend to whom the question of supply was proving a very trying experience, was asked why she did not use the interest on a small sum which she had invested. She said, "Yes, I could use the interest; but it is such a little bit." The widow to whom Elijah was sent had indeed a "little bit,"—only "an handful of meal in a barrel, and a little oil in a cruse,"—but, in obedience to the divine command given through Elijah, she used what she had, and it lasted "many days,"—as the marginal reading has it, "a full year."

Send a comment to the editors
NEXT IN THIS ISSUE
Article
"AS SCARLET." 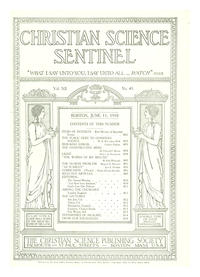