The following incident is offered with the hope that it may be of help to some who are young in Christian Science, enabling them to see that, even when expressed in the old phraseology, the truth may be rightly understood and accepted in Christian Science.

Two men were stanch friends for many years, and as both held strongly to the old theology, their mutual interest naturally centered around the beliefs held in common. One went to a foreign shore; but continued his attachment to his old belief. The other gradually became dissatisfied, and finally ceased all religious activity; in the course of time, however, he became a student of Christian Science. The two friends lost sight of one another for a number of years, but their lines again came together, and in the mean time some one had given to the first the information that the other had become interested in Christian Science, which fact was referred to in a letter, full of love and friendship, but absolutely at sea concerning the subject of Christian Science, the reference to which read as follows: "If your faith has been sidetracked, as I have heard, if you have come to accept one of the delusions with which these last times abound, as has been foretold, my heart is filled with unspeakable sorrow." To this his friend answered in part as follows:— 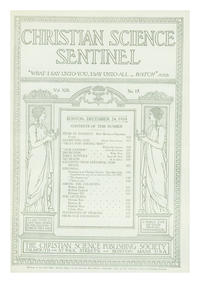