When we affirm that the Christ, Truth, is as effective...

When we affirm that the Christ, Truth, is as effective to-day as in the time of the Master and the apostles, the affirmation is based upon the constant experience of the healing of sickness, many sufferers having been wrested from the verge of the grave, all material means having failed them. Christian Scientists do not claim to be able to do all which Christ Jesus said would be done by those who believe on him, but they are honestly laboring in that direction. It is useful to remember in this connection that in the science of numbers there is a long mental march from "twice two are four" to the problems of Euclid, and in the problems of Divine Science we are still only on the threshold Mere glorification in attempting the healing work in response to a challenge would be as wrong for a Christian Scientist as in the instance recounted of the Master's temptation in the wilderness, when he refused the suggestions of evil to prove himself to be the Son of God.

If we have nothing better then human reason and experience to guide us in fighting "disease and wretchedness, we shall be better equipped than our peers, and shall be as those who are without "hope, and without God in the world." The New Commandment, "That ye love one another; as I have loved you." means we are to love and to help men, and Christian Science teaches that this is the only commandment whereby to destroy poverty, sin. and woe. Surely this way is better than the selfish law of individualism, competition, and accretion, which experience has proved to be hopeless in solving the problems of extremes in the human warfare, but rather aggravates and increases the burdens of the unit and of the unity and of the masses.

Send a comment to the editors
NEXT IN THIS ISSUE
Article
This Christ-Science is the truth to which Jesus referred... 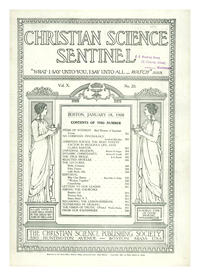