with contributions from J. B., J. Compton Rickett

Christ's mind must be translated, and the two notes insisted on by Bishop Potter, first sympathy and then pains-taking curiosity, need to be interpreted in the widest sense. Sympathy will mean that the difficulties and distresses of our social order are felt as insufferable and intolerable. It will mean not only the establishment of the institutional church and the settlement in slum districts, but the enlightening of public conscience to perceive that the existence of a slum district is as little to be tolerated as an epidemic. It will mean the awakening of public conscience to the conviction that the owner of the slum has no more place in modern society than the owner of a pirate ship or the leader of a marauding expedition. Curiosity, too, interpreted in terms of the Christian conscience, means far-sightedness and deep-sightedness. It ought to come some day to mean that three ineffective churches on the three several street corners are perceived to be, not only by far-sighted but near-sighted Christians, an intolerable outrage not only on common sense, but on the plain commandments of Christ himself. 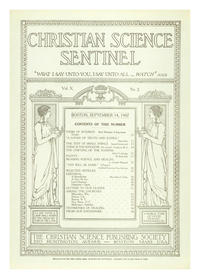