Christendom has universally agreed that the Scriptural record of the life and work of Christ Jesus sets forth the words and deeds of one who was without question the Saviour of mankind. Sacred history had prophesied the coming of this Messiah, contemporary thinkers recognized the force of his presence, and the centuries which have followed him have grown to comprehend somewhat the power of his teaching and example,—a power by no means withdrawn with his personal exit from the scene of earth's activities. Prior to the birth of Jesus the Jewish nation had grasped in some measure the idea of salvation, in that the success of righteousness or the desolating failure of evil had been continuously set forth by prophet, priest, and king. Both before and after the Christian era great leaders of many peoples have thought out wiser and better ways than their nations had been pursuing, and every tribe and people and country has had, now and then, its prophet, its poet, its guide, to urge a more ideal mode of thought and life. However, that element in all countries which has felt and acknowledged the influence of Christianity, unites in paying homage to Jesus the Christ as the one recognized Saviour of the world.

Many forms of worship have sprung from the acceptance of Christ Jesus as a universal Saviour. Groups of men in the earlier centuries defined their conclusions concerning the meaning and application of his teaching, and these deductions, without consideration as to whether they sprang from the best or the worst motives, the broadest or the narrowest judgment of their time, were adopted as set forms of Christian belief. In the middle centuries the letter of this dogma took such possession of the Christian Church that any deviation therefrom was branded as heresy, and the spirit of war and persecution stained the fair borders of that which should have been a magnificent peace-loving and peacepromoting organization. Progress, however, eventually caused external religious oppression to cease, and with more individual freedom in the later centuries creed and doctrine have so relaxed their grasp that multiplied forms of theology, from the creedal orthodoxy which looks upon Jesus as God Himself, to the liberalism which regards him as the world's wisest and best human being, hold place among Christian thinkers. 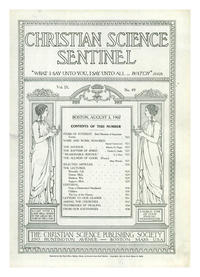