We are printing in this issue a resumé of the Christian Science...

We are printing in this issue a resumé of the Christian Science lecture delivered in this city last Saturday night, not because we advocate the doctrines therein established but because the Christian Science movement is wide-spread and vigorous and is therefore of interest to all thinking people. America, since the landing of the Pilgrims, has been a land of innovations. Particularly in a religious way have we made important developments. Since the signing of the immortal Declaration of Independence every citizen of our land has been free to exercise his religious and political belief in perfect liberty, so long as such exercise in no way deprived others of like privilege. The Christian Scientist may be wrong in his belief, but so long as the belief is honestly entertained no true American will scoff at or belittle it.

As we understand it their places of worship are open to all and no compulsory process is employed in establishing a congregation. There are many thousands of people who honestly and enthusiastically testify to great advantages they have obtained through the organization. And whatever an individual may think as the reality of those benefits, he cannot but respect the honest testimony of the Christian Scientist. Individually we are far from convinced of the absolute efficacy of the methods fostered by Mrs. Eddy, but we stand in the same position in regard to many other institutions that are exploited and reverenced by intelligent and thinking people the world over. Our opinion is well expressed by the old toast, "There is so much good in the worst of us, and so much bad in the best of us, that it hardly behooves any of us to talk about the rest of us."

Send a comment to the editors
NEXT IN THIS ISSUE
Article
The clearness of Mrs. Eddy's understanding has been... 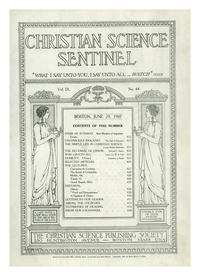