I wish to add my work to the volumes of testimony...

I wish to add my work to the volumes of testimony telling of the works of Christian Science. It is now six years since my little daughter, then two and one-half years old, developed a severe throat trouble. It proved to be a very stubborn case, and was followed by another illness of a most serious nature. Our physician did everything in his power, but the child lay paralyzed and unconscious and with a high fever. At the end of the second week she was losing strength fast and there was no apparent change except for the worse. I became perfectly discouraged, and my brother then begged me to try Christian Science. I had been interested in it for some time, and had read Science and Health, but would not have had the courage to put aside all material means had I not felt desperate. My husband was willing to do anything I thought best, so we explained our feelings to the doctor and my brother went at once for a Christian Science practitioner.

Almost before I knew it relief came. The child's room was cleared of all material remedies, and jacket that the doctor had said the must wear for months was removed. The Scientist said, "Just make her comfortable." The day following the first treatment the nurse was dismissed. The work of Divine healing went steadily on, each day showing marked improvement, and no one who has not been through such an experience can realize the thankfulness and joy we felt when motion came to the helpless side, and when she could drink without difficulty. She soon learned to walk, and although the power of speech was slower to return, all harmony was soon realized, and treatment discontinued at the close of the third week. She was left with no ill effects, and as we said at the time, she was peacefully, satisfactorily, and perfectly healed and has stayed so. I hope this may give courage to some doubting hearts, that they may turn to Truth in their hour of need.

Send a comment to the editors
NEXT IN THIS ISSUE
Testimony of Healing
In the third chapter of Jeremiah we read, "And I will... 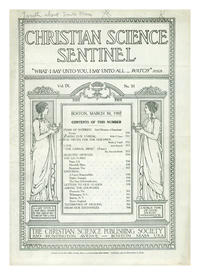