English doctors did a wise thing the other day when...

English doctors did a wise thing the other day when they took the public into their confidence. They laid ther cards down on the table and told the other people in the game that they would play them open hereafter. It was the day when the London medical schools began their fall terms and, as is customary over there, solemn ceremonies marked the occasion. Distinguished doctors spoke to the young students, dwelling upon the nobility of the calling they had chosen, and growing reminiscent, as is the custom of elderly men and those who have made their goals. But they broke with tradition when they told these youths that medication was not to be the aim of the doctor in the days to come. The doctor's medicine case would soon be almost as much of date as the old-time physician's big cane, whose head contained things aromatic for him to sniff so he wouldn't catch the plague.

"The new doctor is be more of a public health officer than one in private practice," said the celebrated Dr. Ewing. growing success in reducing the prevalence of disease and the growth of specialism. More and more it must become the servant of the State. Henceforth its members must devote themselves to preventing instead of curing diseases."

Send a comment to the editors
NEXT IN THIS ISSUE
Article
Our critic complains that because Mr. Young said, in a... 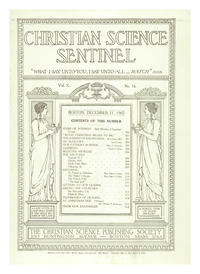