[We are pleased to give prominence to the following letters to Mrs. Eddy in regard to the late Rev. J. Henry Wiggin and his attitude toward her and her work. These letters and the letter of Mr. Edward P. Bates published in our issue of Dec. I make clear the fact that Mr. Wiggin did not claim to have rendered Mrs. Eddy any service other than that stated by her; also that he highly esteemed her as an author.—Editor.] 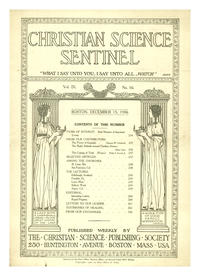