The Alaska Boundary Commission reached an agreement on October 17 whereby all the American contentions are sustained. with the exception of those in relation to the Portland Canal, which Canada wins. On the map which will accompany their decision will be marked the boundary line definitely fixing the division of American and British territory. The United States will get all the waterways to the rich Alaskan territory, with the exception of the Portland Canal, which gives Canada the one outlet she so much needed. Lord Alverstone. though openly inclined to believe in the justice of the American argument that the United States was entitled to the heads of the inlets, as contained in question 5, held out that Canada had established her case in questions 2 and 3, dealing with the Portland Canal. Senator Lodge, Secretary Root, and ex-Senator Turner, the American Commissioners, agreed to cede those points and to start the American boundary line from the head of the Portland Canal, thus giving the Canadians that channel and some small islands. This accomplished, the majority of the tribunal agreed to fix, with this exception, the entire boundary as outlined in the American contention. By the terms of the agreement to appoint a joint commission this decision is final and settles a long-standing contention.

On the occasion of the farewell banquet in Boston to the Honourable Artillery Company of London the Victorian Club of Boston announced its intention to erect in Boston a statue to the late Queen Victoria, and forwarded to King Edward VII. a cablegram to that effect. The following cablegram was received in reply:— 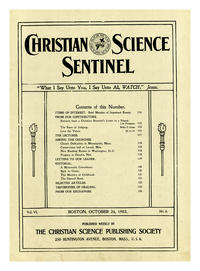