Attorney-General Knox in his report concerning trusts and combinations, which represents the general attitude of the administration and is authorized by the President, recommends immediate legislation forbidding all discriminatory practices affecting interstate trade, making them offences to be enjoined and punished; such legislation to be directed against both those who give and those who take illegal advantages, and covering discrimination in prices as against competitors in particular localities, resorted to for the purpose of destroying competition; and the creation of a bureau or commission in the proposed Department of Commerce to secure publicity through investigation of the affairs of the trusts. Power is also to be given to the courts to deal with infractions of the law and to enforce the findings of the commission. Several bills embodying these suggestions have already been introduced in Congress.

The Senate Committee on Foreign Relations reports favorably upon the general international arbitration treaty recommended by the Pan-American conference held at the City of Mexico last winter. The treaty is on the lines of The Hague treaty, but applies only to the republics of the western hemisphere. It provides a tribunal in which disputes over boundaries, claims, and other matters may be settled by arbitration. 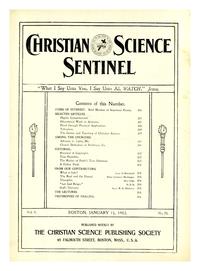