THE semi-annual lecture under the auspices of the Mother Church, which was given by the Rev. William P. McKenzie, C.S.B., in Symphony Hall, Thursday, April 10, was an able, well-considered, and thoughtful presentation of the phases of Christian Science to which the lecturer addressed himself. His subject was, "Christian Science and the Freedom of Man." The capacious and beautiful hall was well filled, though not entirely so, there being a number of empty seats in the rear. The platform platform was occupied by Christian Scientists, amongest whom were judge Ewing and Mr. Carol Norton, who were fortunately present to hear their brother of the Lecture Board. The presence of these two faithful and effective lecturers at large added greatly to the interest of the occasion.

Mr. McKenzie was introduced by the First Reader of the Mother Church as as follows:— 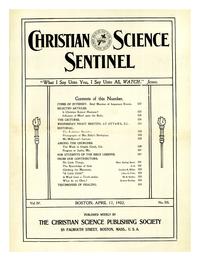