The latest reports from South Africa are to the effect that all the troops for the relief of Ladysmith are past Cape Town, while part of the relief is at Estcourt only forty miles away. On the 15th inst. an armored train which was sent out from Estcourt to reconnoitre, was shelled by the Boers and suffered a loss of ninety men in killed, wounded, and missing. The Boers are sending fresh troops to Ladysmith, which they say must fall in a few days; so that they will be able to confront General Buller, whom they expect on the western border.

It was reported that General Joubert, commander-in-chief of the Boer forces, was killed in action, November 9. The report, however, lacks confirmation, and is generally believed to be untrue.

Send a comment to the editors
NEXT IN THIS ISSUE
Article
Have Miracles Ceased? 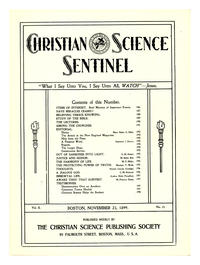