In considering the question posed by this week’s Bible Lesson, titled “Is the Universe, Including Man, Evolved by Atomic Force?”—the only one of 26 Bible Lesson subjects presented in the form of a question—it’s helpful to know two historical facts.

First, up until 1918, when Rutherford split the atom, physicists believed that the atom was the smallest particle, or building block, of matter, and that it was indivisible. Second, it was just seven years before Mary Baker Eddy’s discovery of Christian Science in 1866 that Charles Darwin’s book titled Origin of Species had been published. In his book, Darwin theorized that natural selection was the means by which species either survived or died out. His theory of evolution, a theory that pitted man’s sole chances for survival against the haphazard material forces of nature, not only changed the way scientists understood man’s prospects for survival but caused enormous controversy among Christian believers—a controversy that still lingers today.

Ann Edwards has a master’s degree in theological studies from Emmanuel College, University of Toronto.&nbsp; 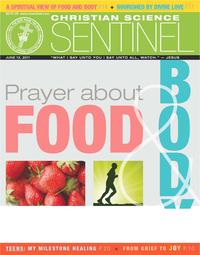