We frequently hear it said today that society is sick, that the churches are failing, and that Christianity is dying. While it is true that outworn theological views and ecclesiastical practices are crumbling away, this is not true of the Christianity that our Leader, Mary Baker Eddy, equates with Truth and with Science. Science and Health with Key to the Scriptures 322:3-7, 135:21-26;

The claim that all religion is doomed is often promoted by those who would like to see Christianity itself die and be succeeded by their own particular cures for society's ills. A similar desire appears to motivate some who predict the imminent demise of Christian Science and the Church that represents it to the world. 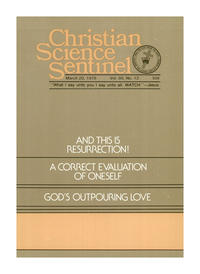