During an epidemic of smallpox in some parts of our country...

During an epidemic of smallpox in some parts of our country, my son came down with this disease. A doctor, a friend of the family, examined him and said he had a very bad case of smallpox. His whole body was covered with evidence of it. The doctor friend, who was required by the contagious disease laws to report the case to the proper authorities, did not prescribe for him or give him medical aid.

This happened when our son was still attending a church of another denomination, although the rest of our family, my husband, daughter, and I were already students of Christian Science. He did not seem to be at all interested in Science, although he respected our stand in this matter. However, when we asked him if he wanted to have the help of a doctor, he said, to our utter astonishment, that he would rather have Christian Science treatment, and he asked me to help him through prayer, which I agreed to do.

Send a comment to the editors
NEXT IN THIS ISSUE
Testimony of Healing
I have known Christian Science since early childhood, and... 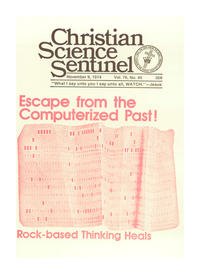