Before the advent of jet aircraft, a young man in the Air Force was assigned to fly as a courier on a small, twin-engine passenger plane between two European cities.

The route passed over several bodies of water and through narrow, mountainous terrain where there was considerable air turbulence. Crew members often called it "the white knuckle flight" because passengers held on so tightly to the armrests on their seats. 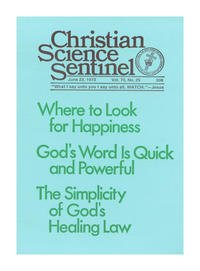